When to Plant a Vegetable Garden in Michigan? (Best Time) 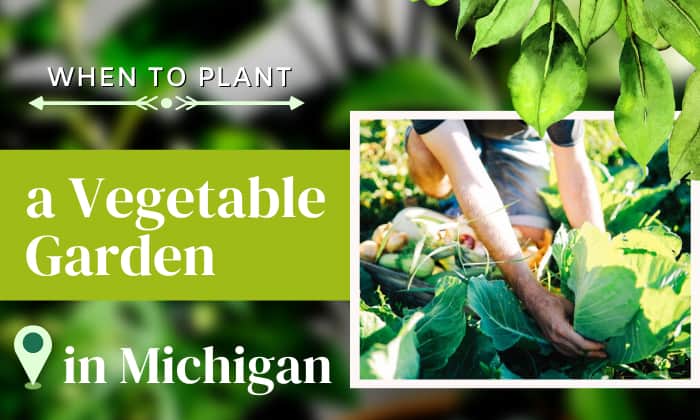 If you want to save money, growing your own food is a smart thing to consider. As a resident of the Great Lake State, you’ve probably asked yourself, “when to plant a vegetable garden in Michigan?”

For your information, Michigan growing season starts in late April and lasts until mid-October, but this estimate can vary depending on the frost dates of your region. Read on for more details.

To determine when to plant a garden in Michigan, consider the following factors.

In general, plants can’t survive extreme cold or freezing temperatures. That’s why it’s essential to wait until the weather’s not icy to start your garden.

Your vegetables should be grown between these two points in time.

Below are the first and last frost dates for some locations in Michigan. For other areas of the Great Lake state, consult almanac.com.

In addition to the frost dates, the type of flora matters in deciding when to plant vegetables in Michigan.

Specifically, cool-season crops can endure lower temperatures than warm-season ones. They may be grown in late March or early April.

They can thrive when the weather is around 40 degrees Fahrenheit, whereas the latter needs the air and soil to be 50 degrees or above.

With that in mind, below are some common vegetables, sorted into cool and warm-season types, plus the temperatures they need to germinate.

You should use a thermometer to measure the warmth of your soil and see if it falls within the range listed below. If the ground’s too cold, don’t sow seeds just yet. 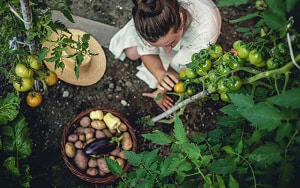 Before I start planting my garden, I always look up the vegetables that can grow in my USDA zone. It’s vital that you do the same, as different climates will accommodate different crops at different times.

For easy reference, check out the month-by month Michigan planting guide below, but first, keep in mind the following:

To find your hardiness zone, go to planthardiness.ars.usda.gov and enter your address.

From the start of April, you can grow broccoli, and this plant can thrive from this time until mid-October.

Beets, kale, carrots, onions, peppers, spinach, and tomatoes can be planted from mid-April, with kale and spinach having a more extended growing season (until mid-October instead of just September like the other crops).

Finally, of all plants to grow in Michigan zone 4, brussel sprouts can be cultivated the longest (from mid-April to mid-October), second only to broccoli.

In zone 5, the vegetables with the longest growing seasons are:

Aside from the above vegetables, beets, carrots, and peas have similar planting periods. All three can be cultivated twice, from April to mid-October, with the first growing season starting in April and ending in June.

However, carrots’ second cultivation period begins in August rather than mid-July like the other two plants.

When to plant a vegetable garden in Michigan? To answer this question, you need to figure out your frost dates, the type of crop you want to grow, and your hardiness zone.

With this tip in mind, you should be able to have a timely and bountiful harvest.

If you found this article helpful, please share it with other people. Thank you for reading!

When to Plant Tomatoes in Seattle? Things to Know!

When is the Best Time to Plant Flowers? – Planting Calendar

When to Plant Grass Seed in North Carolina? (Best Time)

When to Plant Strawberries in Texas? (Best Time)

When to Plant Tomatoes in Virginia? – Gardening Tips

When to Plant Winter Rye? – Planting Season for Winter Rye

When to Plant Sugar Snap Peas for Fall Harvest?

When to Plant Tomatoes in Missouri? (The Best Time)

When to Plant Caladium Bulbs in Houston? (Best Time)