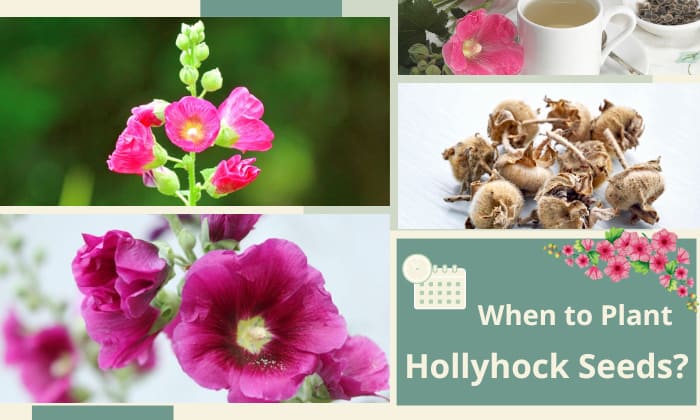 Are you planning to set up hollyhock plants in your traditional cottage garden? If you do, it is a brilliant choice!

Hollyhock is one of the popular flower-bearing plants that blend well with other herbs like Rose Mallows and Daisies because of its tall and colorful blooms.

However, before growing it, taking the first step to know when to plant hollyhock seeds is essential for proper development and blooming time.

So, when to do so? There are different schedules for distinct methods of planting hollyhock, but to be more specific, either spring or fall is the ideal time. 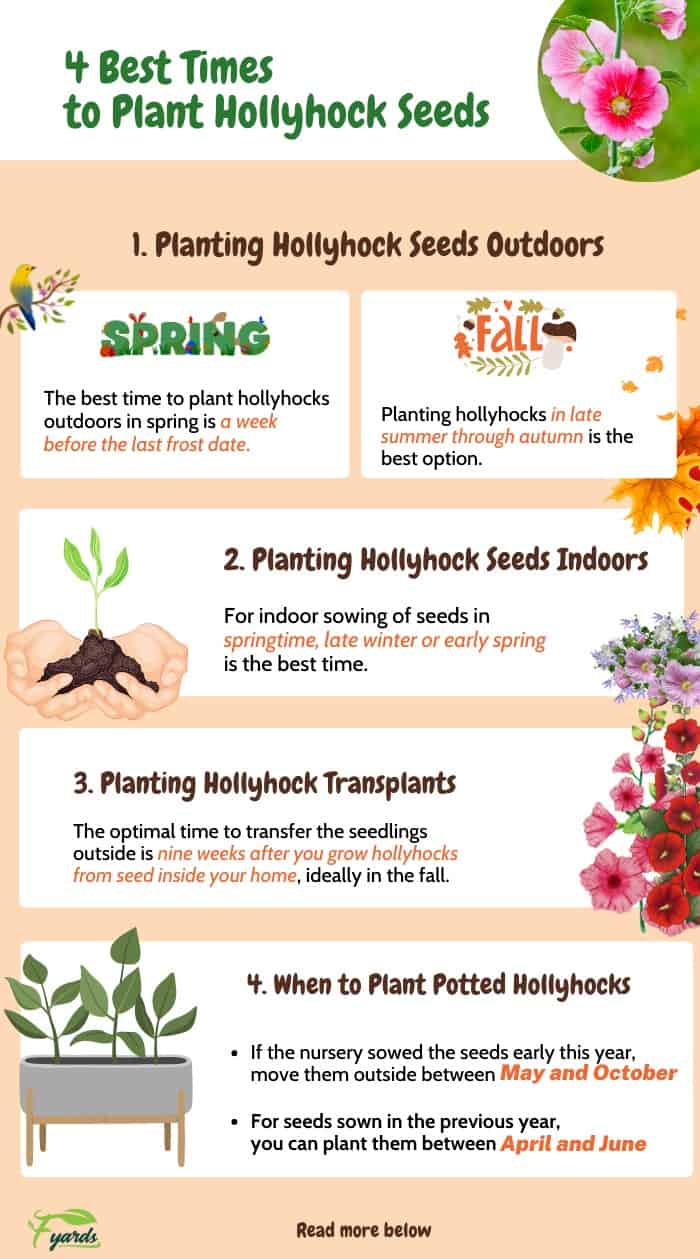 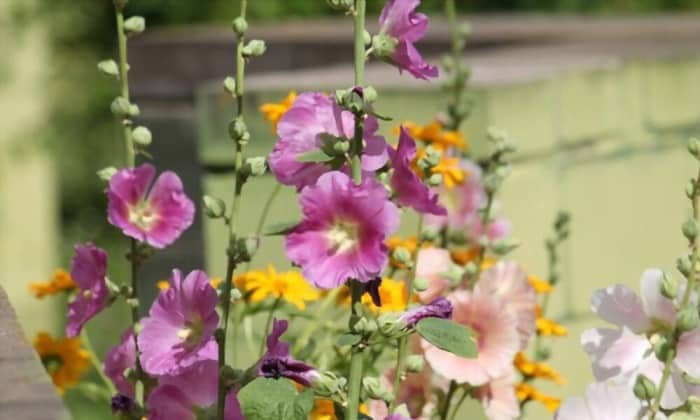 Hollyhock seeds are biennials. It means they need an entire year to have their roots, leaves, and everything get ready before budding in the second year.

Although they take a long time to grow, the good thing is that you have two options regarding when to sow hollyhock seeds. You can plant them either in spring or fall.

Planting hollyhocks from seed in springtime is a perfect choice for those who live in colder regions as during this season, temperatures are no longer extreme.

The best time to plant hollyhocks outdoors in spring is a week before the last frost date.

But what month to grow them in? Again, look up the frost date for your location, and you’ll know. For example, Cleveland’s last frost is April 13, so you can sow hollyhock seeds around April 6.

For those who live in a region with a warmer climate, planting hollyhocks in late summer through autumn is the best option.

The fun part about sowing them in the fall is that your seeds can bloom in the following summer within the first growing season.

The warm temperatures of this period encourage their fast establishment and colorful blooms, giving you a chance not to wait for two years to see flowers. 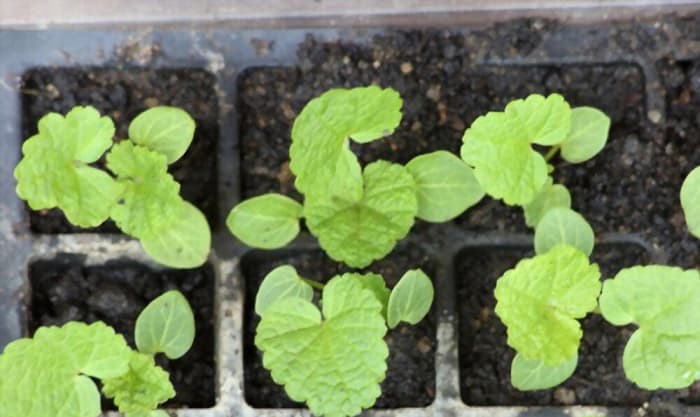 When you start hollyhock seeds indoors, you will have the advantage of cultivating them early and transplanting them when the weather is suitable.

For indoor sowing of seeds in springtime, late winter or early spring is the best time, while mid to late summer is preferable for fall planting.

Here are some growing tips if you prefer sowing indoors for a head start:

The optimal time to transfer the seedlings outside is nine weeks after you grow hollyhocks from seed inside your home, ideally in the fall.

However, if you would prefer to plant hollyhock bulbs in spring, you can transplant them two weeks after the last frost date.

For instance, if you live in Napa in California, where the last frost ends on February 27, sow seeds indoors around December 26, 9 weeks before the frost ends.

After following the 9-week rule, wait two weeks longer after the average last frost before transferring them outside on March 6.

However, before transplanting, always remember that seedlings are tender and fragile. The outdoor temperature might surprise them if you don’t let them get used to it first.

Therefore, to make this task successful, train your seedlings to familiarize themselves with the conditions outside your home by bringing them outdoors for a couple of hours for at least ten days.

4. When to Plant Potted Hollyhocks

The cool thing about growing a potted hollyhock you purchased from a nursery is that you can spare yourself the work of sowing the seeds.

After buying the plant, all that’s left to do is to determine when to put it outside.

How to Plant Hollyhocks? 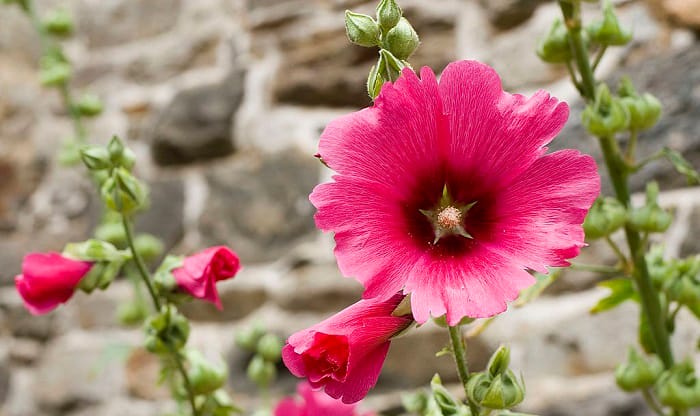 Place them in a location where they can get 6-8 hours of sunlight. They can thrive in full sun as long as you keep them hydrated.

However, for those who live in warmer regions, partial shade is essential to keep the leaves and blossoms from getting scorched.

Hollyhocks will mature in nearly any kind of soil. But to help them grow well, using a seed starting mix is the best option.

Set them in soil that drains well to avoid too much wetness, preferably in a pH range between 6.0 to 8.0.

Seeds and seedlings need regular moisture. Irrigating them when needed, especially when the soil is dry, is essential.

However, it is also crucial to keep them from getting over-watered to the point that the soil becomes soggy.

Once hollyhocks become full grown, they have more ability to withstand dry soil and warm temperatures, so you may lessen irrigation.

Do Hollyhocks Bloom in Their First Growing Year?

No, because hollyhocks are biennial. It means they usually have two growing seasons where they get established in the first period and bloom in the following year.

One tip to keep your cottage garden from looking bland is to sow a new batch of hollyhock seeds while your first set blooms in their second year.

This technique will make them bear flowers on an alternating schedule.

How Many Years Do Hollyhocks Last?

Hollyhocks only live up to three years because they are short-lived perennials. The best way to prolong their life is to remove faded flowers quickly.

The method is also called deadheading. It will help them flourish more in the following years and improve their appearance.

Learning when to plant hollyhock seeds is as easy as knowing how to sow and care for them.

Whether you want to plant seeds outdoors, indoors, as transplants, or in pots, the best way to do it is in spring or fall when the temperatures are favorable.

If you want to shorten hollyhocks’ maturation period, you can do so by growing them in fall to make them bear flowers within a year.

Follow the guidelines above on when and where to plant them to ensure successful gardening. Thanks for reading!

When to Plant Tomatoes in Pennsylvania? (Best Time in PA)