When to Plant Potatoes in North Carolina? (Best Time) 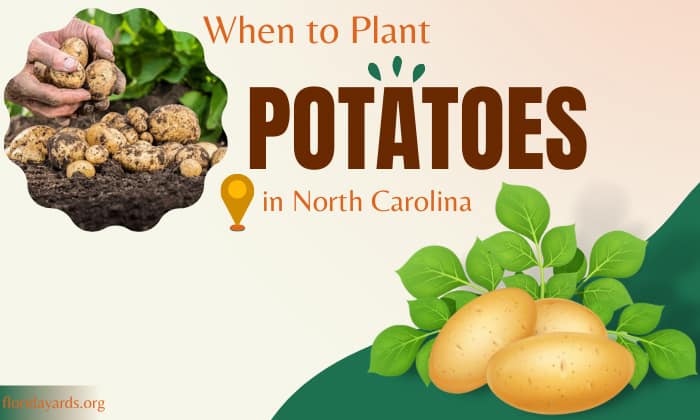 Potatoes are some of the most versatile and well-loved vegetable crops in the US. Not only are potatoes a versatile ingredient, they are also a good source of potassium and vitamin C and contain zero cholesterol.

When is the Best Time to Plant Potatoes in North Carolina?

North Carolina’s hardiness zone ranges from zone 5b to zone 8b, with a humid subtropical climate, which is quite similar to the climate in South Carolina. This means that the region, except for those areas in the Appalachians, have hot, humid summers and cool to mild winters.

Potatoes and many other flowers and vegetables grow well in this climate. These crops can tolerate a little frost and you can plant potatoes in NC in March when the soil temperatures range from 60 to 70 degrees Fahrenheit.

The best days to plant potatoes in February would be by the end of the month, when the ground is no longer frozen. If planted too early, the tubers might not sprout and would be at risk of rotting underground. In general, you can plant potatoes outside when there hasn’t been a frost for about two weeks.

How to Plant Potatoes in North Carolina? 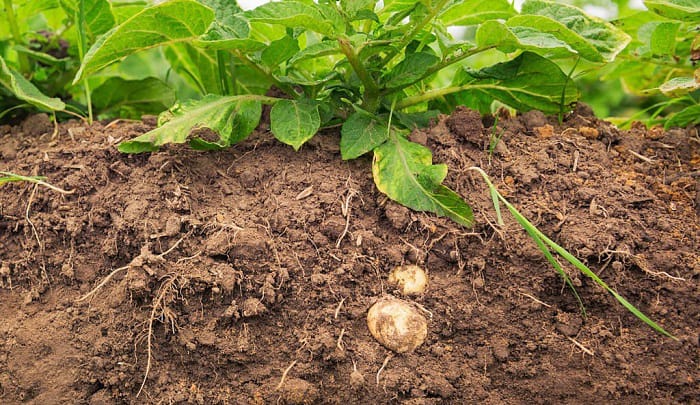 Most areas in North Carolina have mineral-rich soils ideal for cultivating crops, including potatoes. In fact, the state has about 400 different types of soil, however, most potatoes for commercial use are produced in Eastern NC, along the Atlantic coast.

Potatoes grow well in fertile, well-drained soils. Tubers that are sitting on wet soil for prolonged periods have higher chances of rotting or developing diseases. To further increase nutrients in your soil, you can add organic matter such as compost or manure.

Another thing to consider when planting potatoes is the acidity of the soil, which should range anywhere from pH 5.5 to 6.0. If you are not sure about your soil’s acidity level, you can consult your local agriculture unit or a soil testing company. 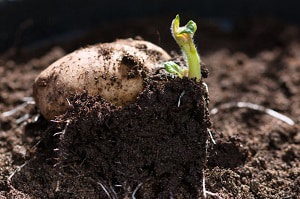 When starting a potato plant, it is important to purchase seed tubers from reputable sources like your local agriculture department or a garden center in your area. Doing so ensures that your potato plants will be long-lived and disease-free.

It is discouraged to plant potatoes you purchased from grocery stores as they might be sprayed with sprouting inhibitors and might be carrying diseases. 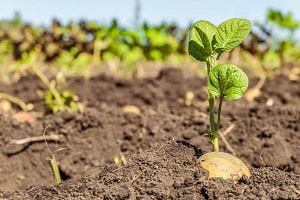 Plant tubers that have at least one “eye”, from which the sprouts will develop. Plant them about 3 to 5 inches deep, cut side down, and then cover with 4 inches of soil. To encourage growth and higher yield, plant each tuber 10 to 12 inches apart. 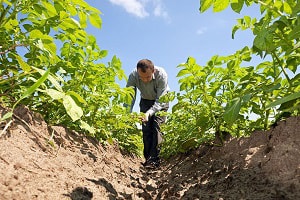 Hilling is a practice by which mounds of soil are added on the base of the potato plant as it grows. This is done to cover developing potato tubers and prevent exposure to light. When exposed to sunlight, potatoes produce a chemical called solanine and the exposed areas will turn green and will taste bitter.

As the tubers enlarge, the plant’s need for water increases. Plants that were not watered adequately will likely have low yield or hollow, poor-quality potatoes. Hence, it is recommended to water thoroughly once or twice weekly.

Step 6: Keep an eye out for pests and diseases 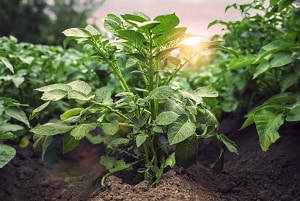 The most common pests that attack potato plants are the Colorado potato beetle, potato flea beetles, and aphids while the common diseases that affect potatoes include early blight, late blight, and verticillium wilt.

Pests can be controlled by spraying recommended insecticides while fungicides can help prevent early blight and late blight.

When is the Ideal Time to Harvest Potatoes?

It takes about 100 days from planting before potato plants could develop mature tubers that are ready for harvest. They may be harvested when tubers have grown to the desired size or when the potato plants have died.

If you want your potatoes to develop thicker skin, cut off the wilted plants and leave the tubers in the soil for 10 to 14 days before harvesting.

Extra caution should be observed when digging potatoes as any puncture or injury to the skin might lead to early spoilage. If you accidentally bruised some potatoes during harvest, segregate and use them first.

How Late Can You Plant Potatoes in North Carolina? 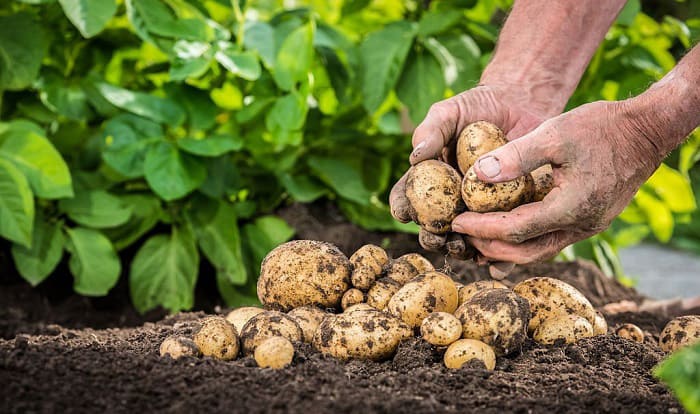 For a bountiful summer harvest, on or before March 31 would be a good time to plant potatoes in North Carolina. This is to give the plant enough time to develop tubers before it dries up in the summer heat.

You can still plant after March, but the yield and quality of potatoes might not be high.

On the other hand, if you want to plant potatoes for fall harvest, you absolutely can! Just check the estimated first fall frost date in your area and plant your seed tubers 90 to 110 days before that.

In western North Carolina, for example, the expected first fall frost would be on October 25, so your seed tubers should already be planted some time between July 07 and July 27.

North Carolina produces over 18,500 acres of potatoes thanks to its rich soil and good climate and while it may seem overwhelming to plant them, potatoes aren’t really difficult to grow.

Apart from providing its basic needs, the trick to having a good harvest is knowing when to plant potatoes in North Carolina given the crop’s low tolerance to frost. So, don’t wait any longer and start planning to plant your potatoes now.

Related: Before you go, check out our articles about the best time to plant some vegetables in North Carolina: