When to Plant Potatoes in Ohio? (Indoor & Outdoor) 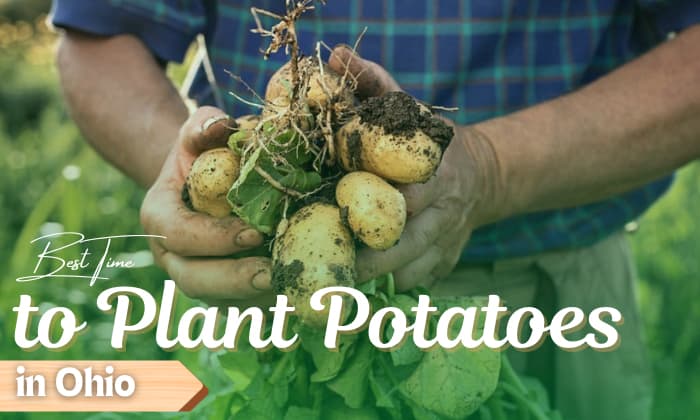 Potatoes are relatively easy to grow. Most homeowners plant them directly in their garden soil, but if you don’t have enough space, you can grow potatoes in a container instead.

While potatoes can tolerate a light frost; however, anything below 28℉ will likely kill the plant. Therefore, it’s essential to learn when to plant potatoes in Ohio before you start.

The planting season for Ohio potatoes starts two weeks after the last frost. So you can sow the tubers around mid-March to mid-July. However, it’s possible to get an early start by planting potatoes indoors 2 months before the last frost date. 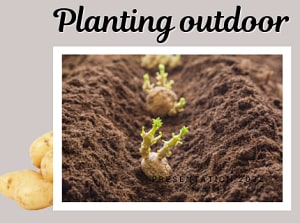 To know the best potato planting time in Ohio, rely on your city’s first and last frost dates. Then, add two weeks to the date to find out the best time to start sowing the crop. Here are some examples of how to know the ideal planting date for your city:

To get a head start, begin to grow potatoes in a container indoors 2 months before the expected last frost. Once the freezing period has ended for 2 weeks, you can transplant potatoes outside.

We’ll use the examples above to help you understand better how to calculate the best time to plant potatoes indoors.

Is it too late to plant potatoes in Ohio?

Seed potatoes must be in the ground by at most mid-July to harvest before the first fall frost sets in. When planting late in the season, consider choosing early-maturing varieties like Irish cobbler and Norland.

However, if you are planting indoors or in a greenhouse, it does not matter how late you plant your potatoes as long as their ideal growing conditions are maintained. You can plant as late as August and harvest just in time for Christmas festivities.

What is the best month to plant potatoes?

The best months to plant potatoes in Ohio are during the spring months, from March to May, after the last spring frost. In some northern regions, extending the planting date to as late as mid-July is possible.

During the period stated above, soil temperatures are in their ideal range (45F to 55F), which encourages plant growth.

Apart from the temperatures, you should also check whether the ground is dry enough for planting. Potato seed planted on wet soil tends to rot or develop diseases.

How long does it take for potatoes to grow after planting?

The amount of time it takes to harvest potatoes in Ohio depends on the variety of your crop.

Can I plant potatoes in May in Ohio?

Yes, you can plant your potatoes in May. In some cities in Ohio, the last spring frost is estimated to be around the end of April, so mid-May would be the perfect planting month for the residents.

How deep and how far apart should I plant my potatoes?

For a high yield, potatoes require ample space. You can position your potatoes 10 to 12 inches apart and plant them 5 inches deep. What’s more, when planting the tubers in row, make sure that each row is at least 3 feet apart.

When to harvest my potatoes?

You can harvest your potatoes after the vines have dried and when the potato tubers have reached full size (which depends on specific cultivars). Once you notice that the plants have wilted, harvest immediately; otherwise, the potatoes may rot.

Be careful when digging the tubers up, as bacteria from the soil could enter through any cut or scrape in the potato and lead to early spoilage.

Potatoes are a wonderful crop to cultivate at home as they can provide you with bountiful harvests with the proper care. You just have to be mindful of the timing and ensure you know when to plant potatoes in Ohio to have healthy, thriving plants.

To summarize, look up your region’s estimated last frost and add two weeks. The resulting date should be the perfect time to start growing potatoes. A deep container can also ensure that the plant will reach its full potential, even if grown indoors 2 months before the freezing weather ends.