When to Plant Turnip Greens in Tennessee? (2 Growing Seasons)

Turnip greens planting in Tennessee is not new. The state has long been one of the top producers of leafy veggies in the United States and has grown over 2000 acres of them, including turnips.

Thanks to Tennessee’s mild climate, turnips here can flourish for two growing seasons. If you intend to grow them, knowing when to plant turnip greens in Tennessee is essential because it helps produce the best yields possible.

Essentially, the best time to plant turnip greens is August 1 to September 30 in the fall or March in the spring.

1. Grow Turnip Greens Plant in September in the fall 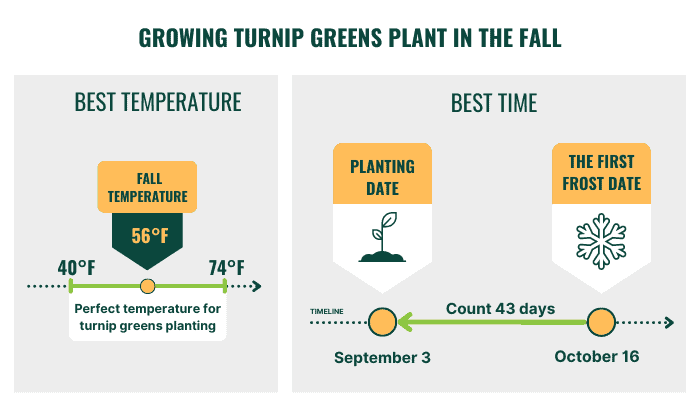 States in the south, like Tennessee, have mild climates that allow cool-season plants like turnip greens to produce yields twice: once in the fall and another time in spring.

You can plant them in the fall because the temperature during this season is around 56°F, perfect for turnips’ requirement of 40 to 74 degrees.

For this reason, autumn is the ideal planting time for turnip greens because they won’t become bitter under extreme heat.

In addition, the advantage of growing turnip greens in the fall is that you can help replenish the food source for deer and other animals. That is because summer gives them a less abundant supply of food.

But for a more specific growing date, look up your first frost in Tennessee and the maturity days of the variety you intend to sow. Here are some steps in determining the exact planting period. 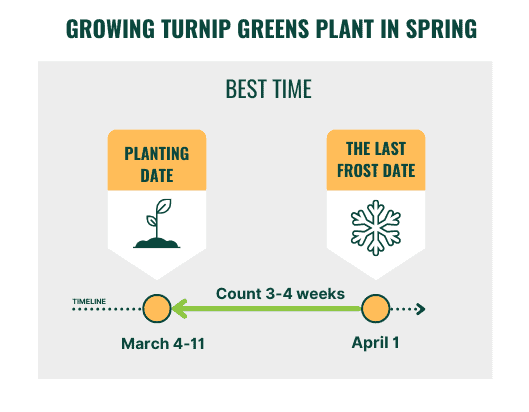 Aside from fall gardening in Tennessee, springtime starting from March is the perfect alternative period for planting turnip greens. This is because of the season’s temperate climate during the day and cooler conditions during the night.

It’s important to know what month to plant them in to avoid affecting their flavor. In Tennessee, planting in March is the safest.

As a general rule of thumb, you can plant turnips in Tennessee 3-4 weeks before the last frost.

However, if you are considering starting seeds indoors, it is best not to do so because turnips are sensitive to transplanting. But you can still grow them in containers, as long as you will not disturb their roots.

Just expose them to sufficient sunlight to encourage the proper establishment of the root system. Use compostable pots as well, so the plants can adapt to in-ground beds more easily. 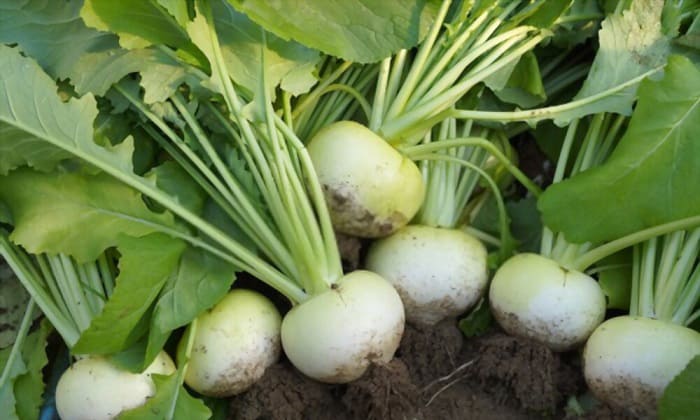 How late can you plant turnip greens in Tennessee?

The latest time in Tennessee for growing turnip greens will depend on how late your frost starts or ends.

Since Tennessee is a vast state, the frost dates will vary depending on where you live. For example, the last frost in the eastern part will arrive on May 1-15. You can plant the leafy greens in spring as early as April 3-17.

For autumn planting, you can sow seeds as late as October 7 in the west if you pick a variety with 43 growing days, since the average first frost here is November 15.

How long does it take for turnip greens to grow in Tennessee?

Depending on the variety, turnip greens will need a minimum of four weeks to reach maturity. But for those with longer growing days, you can expect them to mature and be ready for harvest after eight weeks at maximum.

You are one lucky gardener for living here in Tennessee, because whether it’s spring or fall, you can grow turnip greens!

In autumn, plant them four weeks before the first frost for a pre-winter harvest.

However, if you prefer to garden in springtime, remember to place seeds in the ground at least three weeks before the final frost.

Hopefully, you enjoyed reading this post about when to plant turnip greens in Tennessee. Thanks for visiting!

When to Plant Tomatoes in California for Best Result?