When to Plant Turnip in Georgia for Successful Harvests? 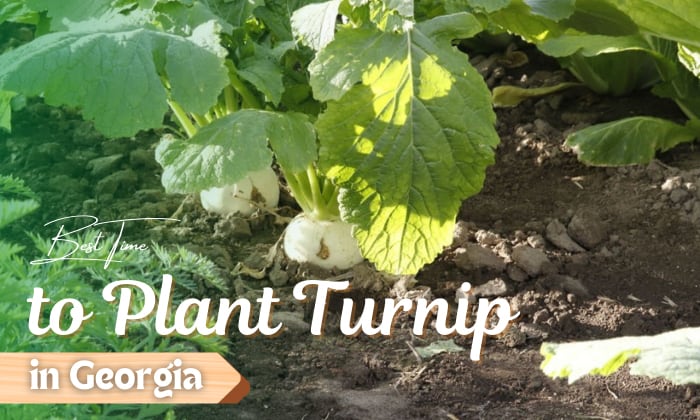 Vegetable production for the fresh market in Georgia has long been thriving. The state’s capable of contributing about 42% to the total leafy greens production in the United States.

And one veggie that Georgia produces is turnips. The great thing is that these crops prosper in the land because of the mild climate here, which matches their need for cooler temperatures.

If you want to know when to plant turnip in Georgia, the best time to do it is in August and September or March for proper growth. 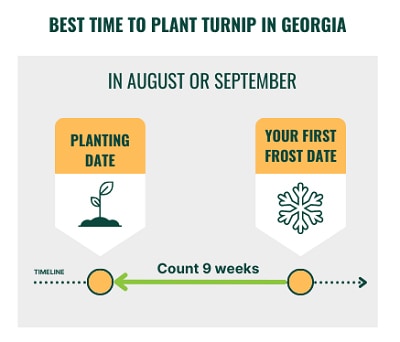 Like other cool-season crops, turnips grow the ideal root system when the climate is cold. A temperature ranging from 40-75°F in particular encourages them to flourish.

For this reason, you can grow turnip greens and its taproot during late summer to fall, when Georgia temperatures are around 55-75°F.

When you plant fall turnips, the standard rule is to sow seeds on the ground nine weeks before the first frost date. And that is around August or September, depending on when your freezing period will begin.

Here are the simple steps on how to find the exact planting date:

Turnips should be harvestable 5 weeks after planting. They are great at tolerating frost. That’s why you don’t need to worry about letting them sit for a bit longer in their garden once the plants reach maturity.

As long as the soil is still workable and not yet covered by hard frost, it is safe to leave turnips there.

The advantages of doing this is that the cold weather will improve their taste, and you can harvest continuous yields of these pre winter turnips when you mulch them. 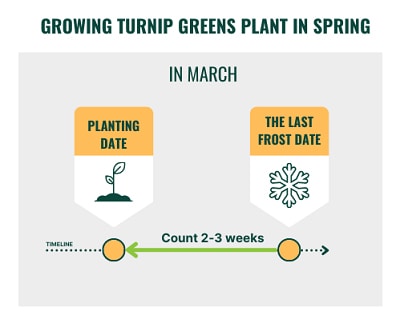 Because of the mild weather during the day and cool nights in springtime in the South, states like Georgia enjoy an extended turnip growing season.

For this reason, you can plant turnip greens in Georgia the second time in spring if you want to harvest another round of this crop. As a general rule of thumb, it is best to sow seeds 2-3 weeks before the last frost date in your region.

After knowing the best time to plant turnip greens, you can now sow your seeds outdoors. Whether you grow them directly on the ground or in containers, there is not much of a difference.

Turnips will still need fertile soil with proper drainage to have the best root growth. And you need to sow them as deep as ½ inch.

However, compared to putting them in the garden bed, where you can grow up to 8-10 turnips per foot, 3-4 seeds are sufficient for a 12-inch wide pot. But it doesn’t matter, as both places will allow them to grow well. 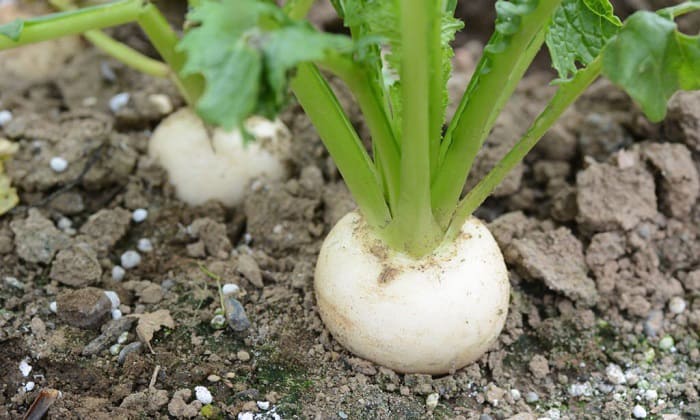 What happens if you plant turnips in the spring?

Your turnips will grow well when you plant them in spring. As mentioned above, springtime is a good period to cultivate them if you want to have as many harvests as possible in a year.

Temperatures during this time are mild, ranging between 65-80°F in Georgia.

And this window satisfies their need of 55-85°F to germinate quickly, which is essential for their initial growing stages because germination should happen within seven days.

Can you plant turnip greens in March?

Yes, you can plant turnip greens as early as March because of the period’s favorable weather. And since the optimum planting rule is 2-3 weeks before the last frost, that is around March or April in Georgia.

The most important thing about planting them during the early part of spring is that you can prevent them from growing under high temperatures, which are typical of summer.

Planting them during this time will protect them from root damage due to hot climates.

Whether you plant turnips in pots or directly on the ground, they will grow well, as long as the temperature is warm enough in autumn or spring.

Now that you know when to plant turnip in Georgia, look at your frost dates and plan when you are going to grow them to produce abundant yields!

Furthermore, You may be interested in planting turnips in other states, don’t forget to visit our articles for more on the best time to grow them:

When to Plant Roses in Zone 7? (Best Month in the Year)